He Who Doesn't Jump

Milan had just won the game against Liverpool in Athens, becoming the Champion's League's victor. Maurizio and I head down to the area between the Post Office and City Hall, where crowds gather to celebrate. We parked a few blocks away, and began to hear car horns and air horns and when we climbed the steps of the post office building, there was a fair-sized crowd gathered opposite us on the steps of City Hall. Almost without exception, every person was donning the Red and Black of the Milan team. We sat and enjoyed the show.

A couple of details to help you understand: if you were chanting this, YOU WERE JUMPING. While black and blue can indicate a bruised, and beat condition, which you might interpret in general terms as the loser of a fight, in this specific, Italian soccer context, 'nero e azzurro' are the jersey colors of the Inter team, the arch-enemy of the Milan team.

So, an accurate translation of this chant is: "If you aren't jumping up and down you belong to the losing enemy!" The chant was accompanied by screaming, whistling, clapping, fireworks, flags, 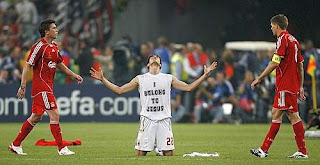 banners, posters, flares, hugging, laughter and of course, jumping. Scooters and motorcycles cruised by, honking horns, drivers standing and engines gunning. Overloaded cars and trucks, too, drove by slowly, people hanging out of windows and yelling and cheering.

While entertaining to watch, I was reminded of the first time I attended an Italian soccer match and the question that we asked as a team afterwards - how do we capture this passion, which lies dormant in the heart of every Italian man, and give it to God?

Nowhere else will you see it here. Businessmen, grandfathers, dance instructors, bankers, college students, grade-school kids, housewives, you name it, they were there showing their excitement, their joy, their loyalty to their team but these same people will go days or weeks or months without letting this passion show. So, one might venture to say it is because of their usually passion-less lives that when the opportunity is afforded them, they express it with extra force. OK, maybe so, but my question is, in all of life's events and activities and moments, what is it about a victory on the soccer field that really brings it out?

I know. Jumping isn't the litmus test to inherit eternal life. It isn't as if God will say someday, "He who doesn't jump, hell-bound is, is." But, it is indicative of the spiritual condition of the people here - calm, calculating, compartmentalized - at all costs avoiding the brutta figura, but somehow, a team from a city 5 hours away wins a soccer match against a British team in a stadium in Greece and all inhibitions are cast aside. Suddenly, the guy who runs the bank is jumping up and down next to the guy growing vegetables for a living. Luxury sports cars are riding side by side with old, beat-up delivery vans, both holding screaming fans inside. Lines are crossed, walls are torn down, if only for a few hours and I simply ask, how?

The flip-side of this is that in this Gospel-saturated land, where the words of the Gospel, while still powerful, fall on desensitized ears, disciple-making is about living with the people and showing them Jesus. So before asking them why they aren't 'jumping for Jesus', I need to be sure I'm not becoming 'he who doesn't jump'...
Posted by Jason Casey at 5:58 PM 3 comments: 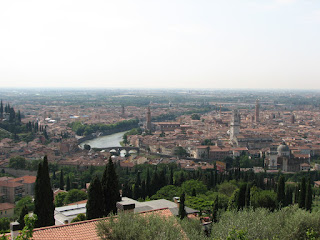 As we drove home from Verona yesterday evening at 80 mph down the windy Italian superstrada, windows down to get some respite from the 90+ degree weather, we came up over a hill and there it was...Ancona. Hugging the 'elbow' of land that juts out into the Adriatic, it spread out before me and made my heart skip a beat.

We had just spent two days visiting Verona (pictured here), about 4 hours north, which is the destination of the new team being put together by Team Expansion in conjunction with Shively Christian Church's vision. Verona is, put simply, beautiful. No wonder Shakespeare set his most famous tragedy there, walking its streets alone is inspiration enough to write of love and beauty. It is nestled at the base of the mighty Alps, minutes away from Italy's largest lake, full of Roman and Medieval relics and monuments, housing its own amphitheater and divided Venice-style by the Adige river...beautiful, modern, clean, safe and sophisticated.

Driving home, while I processed everything, I came back to think of "plain, old Ancona". It doesn't attract the tourists and most travel guides skip right over it. It is small, provincial, a seaport town. And yet, it is where God has placed us. When you are where He calls you, it serves as a spiritual anchor that the world doesn't understand. I love watching the expressions of the anconetani when they ask 'why Ancona?' I can say it is because of the sea or because of its tranquility, but in the end, it is simply, Ancona.
Posted by Jason Casey at 3:19 PM 1 comment: 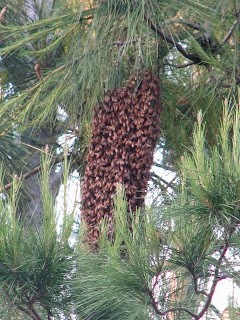 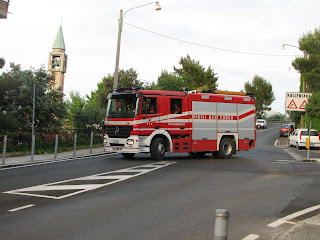 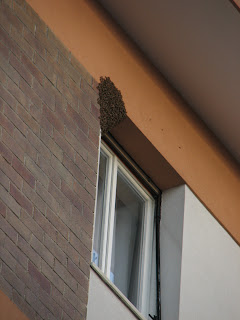 As they were still formulating a plan, the bee specialista arrived and got suited up. He found a way to get into the upstairs apartment and a little while later, the bees were gone, safe and sound. It was yet again, a funny example of how the idea of efficiency in Italy, is very, VERY different.
Posted by Jason Casey at 2:41 PM 4 comments:

I promise, thanks to those who've reminded me that it's been a month now.

The next one has to do with bees, a dead widow and very inefficient firemen.
Posted by Jason Casey at 11:51 PM 1 comment: