Finding Grace on the Slopes

I was ten years old the first time I went skiing.  And it should have been fun.  It should have been an adventure.  It should have been memorable.  It was none of those things.  I hated it and have blocked most of the memories from my mind save for the feeling of cold, wet frustration.  In those formative years, the identity I was forging was wrapped around appearing successful, about looking good.  Skiing definitely didn't fit the category so I decided to never do it again.

Danny and Chrissy Tovar have become some of our closest friends over the past couple of years and they talked us into it.  I fought and resisted, made excuses and procrastinated, but they were persuasive and in the end, I caved.  We put dates on the calendar and set money aside, we were going.  Destination: Pagosa Springs, Colorado.

We took our youngest two and they were excited.  It wasn't until the first morning on the slopes that they realized what all is involved in skiing.  If you've never been, it's quite an experience.  It was snowing and blowing hard that day, which made all of this more difficult.  After buying our tickets we waited to be fitted with boots and skis and shown how the equipment works.  Then we trudged through the snow carrying everything to the bunny slope where our instructor (who turned out to be really lousy) began our four hour lesson. 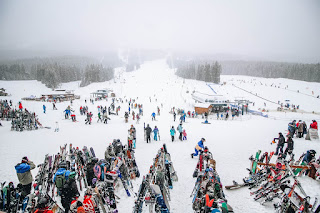 Throughout the lesson, Danny and Chrissy would come and check on us before heading off to enjoy the blue and black runs.  At the end of that first day, the instructor convinced me I was ready for the easiest of the blues.  I was scared and felt pressured, but went along.  Danny came with us.  Heather and the kids had had enough and headed to the lodge.

We rode the lift to the top of the peak and started our way down.  I fell.  A lot.  Over and over, I would get up, adjust my equipment, run through all the lessons in my head and then wipe out.  Hard.  Each time I was afraid I would twist a knee or hurt my back.  I was nauseous and the storm made it hard to see very far ahead.  We came upon a narrow section where the left side of the slope was a steep drop into deep powder and I clung to the right bank, slowly waddling down as little kids zipped by me.

By the time I got to the bottom, I was done.  We packed it up and headed back to our condo.  My whole family had had enough.  No interest in going back.  Everyone had counseled us to get back up and try a second day, but we had no desire.  I felt like a failure again, embarrassed all over gain.

The next day we stayed at the condo.  We played an eight hour game of Rail Baron and nursed our sore bodies.  We ate good food and processed our first day with the Tovars.  That afternoon, the question of whether or not we would try a second day again came up.  I did not want to, but felt that competitive spirit rising in me.  Danny and Chrissy, both, gently encouraged us to try it again, to give it a fresh start.   So we did.

The second day was much better.  It was sunny and clear.  Heather did better, but was ready to call it a day.  Harrison was feeling better and by lunchtime was off with Danny to ski down the blues.  Jenova overcame her fear when she found a new and better instructor.   She had mastered the bunny slope and I finally convinced her to try the intermediate one.

Three hours later, she was jumping off the lift and soaring down the slope in front of me.  I was able to make it down consecutive times without falling.  The truth is, though, I still wiped out from time to time.  Hard.  My kids did better than I did.  I was a 43 year-old beginner.  Toward the end of that second day, I lay on my back in deep powder after wiping out.  High above me, people passed overhead on a lift and shouted down encouragement, "Get back up!  You got this!"

That evening we sat, exhausted, around a table at a pizza pub and ate delicious food and drank cold brews and I found myself getting choked up.  Why?  We had experienced grace on the slopes of Pagosa Springs.  Danny and Chrissy had pushed us gently, provided everything we needed and walked with us when they could have easily run on ahead or judged us or mocked us, or even just put up with us.

We will go again.  We all want to, even though Heather may stay in the lodge.  Grace has left a good taste in our mouths.  My shame, my failing have been redeemed because someone was willing to extend me undeserved favor.

Photo by Veronica Kei on Unsplash
Posted by Jason Casey at 3:44 PM