Pancakes, the Sea, and the Steering Wheel

We have a book in our family, its origin is mysterious, which contains on its last page a secret formula, which allows me, Daddy, to create delicious, fluffy pancakes to the delight of my harried wife and my sugar-starved children. Our Saturday morning started with a hot stack of these.

I had promised Jacob that I would take him somewhere special today and he graciously allowed his little brother, Harrison, to go with us. We bundled up and headed out to Portonovo.

Portonovo is a hidden little beach at the foot of Monte Conero, about 15 minutes south of Ancona. During the winter months it is almost completely empty which makes it a great place to walk and skip rocks and take a nap. We played for a while on the beach before climbing up on the bigger rocks that form a wall to protect an old Napoleonic tower. There we found a perch, our special, little place and sat in the sun and watched the fog roll in from the sea. 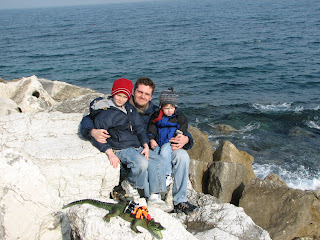 After a while, I glanced back to my right toward the beach and to my surprise, saw our friend, Maurizio, standing there. We've known him for a few years now and I've studied with him and challenged him on numerous occasions to give himself completely to Christ. The analogy I have used repeatedly with him is that of a steering wheel. He needs to let Jesus take control of his volante and let him steer his life. He is somewhere on that path toward surrender, but keeps fighting and making excuses. Who doesn't?

He recently told me that he didn't want to spend time together anymore and that he wanted to take his own path, and so there has been a week or more of silence between us. I motioned him over and he climbed over the rocks to us and when he recognized us became overcome with emotion. He had the Bible we'd given him in his hand, worn and used, as well as a book about the sea.

We gave each other the Italian greeting on that precarious rock and he told me that he had been planning to come to our Life Group tomorrow and tell me he was ready to give up the steering wheel. He's said this before, so I didn't proceed down to the water's edge, as you might expect most missionaries to do. Instead, we sat on the rocks, both of us laughing at the 'irony' of running into each other there when the rest of the morning I saw maybe 5 people in that area. We walked around Portonovo. He carried a sleepy Harrison on his shoulders. We looked at the seagulls and ducks and then parted ways. He will be coming tomorrow to fellowship, worship and share with us and I am convinced of this:

He is a man that desperately needs to be set free. He is torn by voices and a myriad of spiritual lies. He is lonely and hurt. Our church's challenge to him, as we've welcomed him and loved on him, has always been, trust US when we tell you to trust your life to GOD. Only then will he be filled and cleansed and changed.
Posted by Jason Casey at 1:54 PM

there's something about discipleship and shorelines that have that kind of allure to shake us out of our own sinful nets into a freedom that only a crucified-risen Christ can beckon us to join.

so how did life group go the next day?? Should you really baptize anyone in water or should it now be done in a giant glob of mayo?? Hopefully no one reads this, they may not understand the inside joke. email me sometime sean@fccrr.org