Today was another good day. Breakfast was the same, though our kids seem more and more distracted because they have friends they want to hang out with. They went off by themselves to the kids’ programming and we dropped Jenova off before meeting with the lady who did Harrison’s Early Reading evaluation.

She was so good. Jean talked to us and really seemed to care about not just Harrison, but all the kids. We share some of our concerns and she was able to bring her experience and expertise together to really help and encourage. She started off by telling us that Harrison is a talker! Ha, ha. We were thrilled to get a good report on his progress and took notes on some areas we could help him improve and continue to become a good reader.

We then made it in to the last part of Jeff’s devotional – this time using Paul’s prayer in Colossians, talking about being “Guided by His Wisdom”. It was a good reminder of what, from Scripture, God’s will is. Got to talk to him a bit during the coffee break before discovering they had Nutter Butters! They also announced that one of the children has broken out with Chicken Pox…gulp.

For three hours this morning, Jacob met for his second, three-hour diagnostic session. At lunch, once again, he didn’t say much about it – just that it was easier today than on Monday. Heather and I split up for the workshops in the morning again. She attended ‘Navigating the Curriculum Jungle’ while I sat in on Debra Bell’s fascinating, yet scary, ‘Twenty-first Century Education.’

Next was the main session by Dr. Egeler talking about the Carpe Aeternitatem – Seize Eternity, why settle for a day? He’s an amazing storyteller and had us spellbound by the way God weaves people’s stories together. We sat down with one of the SHARE workers, Cynthia,

at lunch and she was in tears because two of the people mentioned in the story happened to be students of hers at a boarding school in Africa years ago and she hadn’t heard any of it.

It was good to ask her about some of the research she’s been reading and doing concerning learning second languages. We talked about what happens when you put a child into a national school when they are not yet fluent in their mother tongue. She told us that 20% of children in national school situations (where they speak a non-mother tongue) will have language difficulties. She was able to encourage us and give us some good ideas.

At 13:30, Haven returned to the 9th floor lounge for her 2nd session of the Iowa Test. At 14:00, Jacob and Harrison returned to their programs. I hung out in the room with Jenova while Heather attended a great workshop called ‘Growing to Read’. After handing off Jenova to the

nursery, I made it in time for ‘Leadership in the Home’ while Heather attended ‘Resources for Supplementing National Schooling’.

When we all came back together, Heather took the big kids swimming and I drove into town with Jenova to look for some things to add to our dinner. I failed, but found a knock-off Hungarian Starbucks…good stuff. We had some more summer sausage and cracker sandwiches. 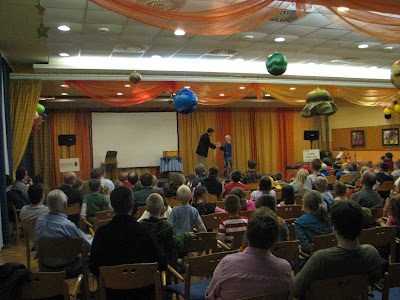 Heather attended a Ladies’ Tea while the kids and I went to the Magic Show – very entertaining. I gave in afterwards and let Jacob and Haven go swimming again with their friends and I went to the room with Harrison and Jenova. I rented Hair-Bear a movie on iTunes and Heather stayed out a while longer to encourage a fellow mom.

Now, I’m sitting in the hallway, getting just a thread of wifi from the lobby downstairs, sending this off before heading to bed. Tomorrow is our last full day of conference and we have two important consultations. Thanks for your prayers!

Sounds like you are enjoying it! I hope it is beneficial for your whole family.

I am pretty sure the pool wasn't open when we were there! I'm glad that it is for you guys!

I'm hoping that you will meet some of our Kosova friends, the Fryes and the Gallinas!

Wish we were there with you! :)

Sounds like all is well. Praying for consultations and such. Today I had GMO alone. I went to Vincenzo. Took up the entire morning.
Chloe took notice of all the American Girl books! Looks like you guys are building up some curriculum, as well.
Glad the moms are on the mend!
Miss you guys. See you soon.
Heidi