First off, I smelled something burning. I was in the living room and I could tell it wasn't food but didn't think much of it until I saw Harrison's little wooden Thomas 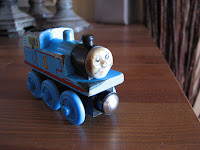 train. Yes, it seems our little 2-year-old wanted to see what would happen if he drove it into the little blue flames on top of our stove. Fortunately, he was not hurt. That can not be said about what happened next.

Haven had just gotten up this morning and found a euro under her pillow. The tooth fairy had come and made the switch. One front tooth down, one to go. Silly parents, we thought the next one would come out a few weeks or months from now, but no. Her big brother Jacob had something else in mind. During an altercation in her bedroom, Jacob got mad and punched her in the face. Heather called me from the back side of the house saying, 'It's an emergency!' I ran and overheard Jacob saying, 'I punched her and knocked two teeth out...' After a 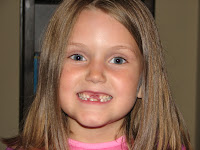 moment of looking at him funny I took Haven into the bathroom and had her wash her mouth. I glanced at her mouth and saw that only two were missing. 1+2=3. Something wasn't adding up. I asked her if she was OK and through sobs and tears she whimpered, "How much will the Tooth Fairy give me for this one?" Dang capitalists! I asked frightened Jacob where the teeth were and he led me to Haven's room. He handed me one tooth and one small piece of white plastic. OK, so he only knocked out one tooth. "You knocked out your sister's tooth!" Whew...after a LONG speech about 'With great power comes great responsibility' the punishment was handed down. No video games for 5 days. For Jacob, that will be enough. For Haven, well, she now has permission to sing a Christmas song early which is ABSOLUTELY FORBIDDEN in this Casey home. How was your day?
Posted by Jason Casey at 9:01 PM

Hey guys! First I want to say I am supper excited that you guys got a Wii. I know you will use it a lot. Second, I actually got to sing "All I want for Christmas is my two front teeth" on Christmas when I was Haven's age. I lost them both within a day or two. I loved reading all your updates. :)